PLANNING FOR A BULLY-FREE SCHOOL ENVIRONMENT IN TRINIDAD AND TOBAGO: IT'S NOT THAT SIMPLE

10 minute read
'If there is no solution, it is not a problem.’ So goes the ancient Zen saying. But what if the problem has gone unrecognized for centuries and solutions that work are only now beginning to take shape? Such is the case with bullying.
by Jean Bernard, Alysoun Johnston and Ravi Rampersad
We begin with the premise that effective solutions are grounded in a common understanding of the problem. According to a widely-shared definition, bullying is ‘unwanted aggressive behavior that involves a real or perceived power imbalance and is repeated, or has the potential to be repeated over time’ (www.stopbullying.gov). Once considered by many as a normal and relatively harmless part of growing up, bullying has become more widely recognized as a serious problem that manifests itself in ever more damaging ways in schools and communities around the world. Responses have resulted in a proliferation of policies and programs, each based on its own perception of the nature, causes and impact of bullying. Nowhere, however, have simple, one-dimensional anti-bullying measures resulted in significant changes in behavior over the long term. Solutions that actually work take careful planning and are complex at every stage—from identifying causes and measuring prevalence to working out evidence-based remedies.
International efforts toward achieving the UN Sustainable Development Goals have targeted the problem of bullying and other forms of school-based violence as a global crisis that must be successfully dealt with if the promise of high-quality, inclusive education is to be realized. A new report from UNESCO (2019) states that nearly one in three students worldwide (32%) has been bullied at school at least once during the previous month. Further to the alarming rise in frequency, this and other reports confirm that bullying knows no borders. Children are threatened, intimidated, physically or verbally abused, and socially excluded all over the world—whether they live and go to school in low-, middle- or high-resource countries­—with disastrous consequences for their well-being and academic success. Adolescent suicides and self-harming behaviors attributed to bullying are rising in some countries at unprecedented rates, partially due to the phenomenon known as cyberbullying.
In recent years, schools in the Caribbean have sought solutions to the increasingly prevalent problem of bullying and other forms of school-based violence. The problem of bullying in schools across Trinidad and Tobago has intensified in recent years and is often highlighted in the media. Issues of security and safety are complex, affecting not only children’s physical safety but also their emotional and mental wellbeing and ability to concentrate and participate in the classroom, school and society.
As partners in a ‘Safe Schools’ project managed by Deloitte and Touche in Trinidad and Tobago, our team led a weeklong bullying prevention workshop (‘Stand Up! Shout Out!) for teachers, school leaders, staff and parents at East Mucurapo Secondary School (EMSS), on the outskirts of the capital, Port of Spain. EMSS was selected from 35 schools deemed to be at risk for violence and behavioral issues. The school has a student population of 900 ranging in age from 12 to 16 and only one part-time social worker, one full-time guidance counselor and two safety officers. The challenge was to work with participants to design a program that would put an end to daily bullying incidents in the short run and, at the same time, set into motion a process that would transform the school culture into one where all students feel safe, included and able to reach their full potential.
In preparation for the workshop, we conducted a wide-ranging review of existing anti-bullying programs to identify approaches and components that could be adapted to the Trinidadian context. Not surprisingly, ‘whole school’, high-intensity approaches modeled after the highly-regarded Olweus Bullying Prevention Program (Norway) and the KiVa program (Finland) are demonstrably more effective than short-term, single-component interventions. In pre-workshop interviews, school leaders reported that many EMSS students also face gun violence, gang and drug activity in their communities, leaving them vulnerable to victimization and negative influences at home and at school. The school’s long-standing principal recalled stories of past students who had risen to national notoriety as criminals and gang leaders, often meeting untimely deaths.
Convinced of the need for a long-term approach that takes local context, causes and multiple perspectives into consideration, we conducted a brief pre-workshop survey of student perspectives on the nature and causes of bullying. Of the 98 respondents, the great majority felt that some of their peers had become bullies because of problems at home: they were victims of bullying or other abuse by family members or, as one student put it, ‘their parents didn’t give them enough love.’ Student respondents were more divided about what the school should do. Suggestions ranged from installing more surveillance cameras to withholding privileges from bullies or expelling them from school. Several thought teachers and staff were not doing enough to protect them (‘Take them out of school! Do your job!’), while others offered constructive solutions: ‘We need to learn to get over our differences,’ wrote one 12-year-old. Another suggested that parents of bullies be brought to school for counseling.
During the EMSS workshop, we learned that student responses to the pre-workshop survey more or less mirrored the views of teachers, school leaders, safety officers, counselors and representatives of the PTA. Workshop participants knew that bullying had become a severe and frequent disruption to learning and that most incidents did not take place in classrooms and were not detected by teachers or other staff. Some younger students had reported, for example, that they feared using the bathrooms or waiting at the bus stop after school. While most reported incidents involved threats or actual physical violence, other kinds of direct and indirect bullying were also on the rise, including verbal abuse, social exclusion and cyberbullying. 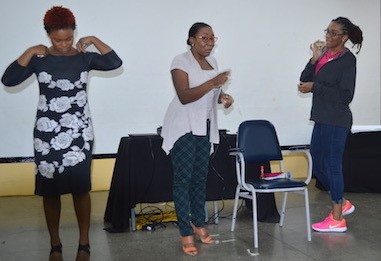 EMSS teachers re-enact a typical social exclusion bullying incident
Although the need for a long-term, comprehensive solution was recognized, the priority for students, teachers, parents and school staff was to develop a policy and plan for immediate action to stop the current violence. For example, the group agreed that a more effective system for dealing with alleged perpetrators should be devised and enforced. It would go beyond punishment to include measures such as restorative justice practices and community service for bringing about positive behavior change in repeat offenders. Additional suggestions proposed by workshop participants were far from simple ‘quick fixes’, such as:
These initial proposals gave rise to calls for a more for a comprehensive, sustainable solution to bullying aimed at transforming the school culture and, ultimately, the communities. Immediate steps could, however, foreshadow aspects of the longer-term solution. For example, construction of the ‘safe space’ would engage students in transforming a drab quadrangle into an inviting meeting and performance space complete with seating, vibrant colors and student-designed murals. The possible adaptation of high tech tools for anonymous reporting and evidence gathering similar to the ‘Say Something’ smart phone app developed by Sandy Hook Promise met with the group’s enthusiastic approval, but is dependent on resources external to the school. Teachers were especially keen to learn how to integrate social and emotional learning into the curriculum in order to enable students to build positive social relationships, to negotiate disputes and to become more resilient, empathetic and in control of their emotions as they transition from childhood to adolescence to adulthood.
As part of the follow-up to the EMSS workshop, planning is currently underway for scaling up from grassroots experiences such as this one to the formation of an exemplary ‘safe schools’ policy to ensure that children and teachers throughout the Caribbean are free from fear of violence in all of its forms. Anticipated lines of action include (1) new standards for the architectural redesign of schools and other learning environments, (2) curriculum reform to integrate social and emotional learning, (3) development of learning resources that promote nonviolence and conflict resolution, (4) intensive training and ongoing support for teachers and school staff, and (5) guidelines for school—community collaboration on awareness-raising and parent support.
1 Fox, B. Farrington, D. and M. Tfofi. 2012. Successful bullying prevention programs: research design, implementation features, program components. International Journal of Conflict and Violence, v. 6(2). pp. 273–283.
2 Spectacle Learning Media. 2018. Stand up, shout out! Engaging teachers, students and communities in putting an end to bullying. EMSS, Trinidad and Tobago workshop report. https://drive.google.com/open?id=16H8v_9cUoWjjI0SWPiDtIQF-Swis7mZU
3 UNESCO. 2019. Behind the numbers: Ending school violence and bullying. Paris: UNESCO. https://unesdoc.unesco.org/ark:/48223/pf0000366483
4 www.stopbulling.gov
Alysoun Johnston is a social studies teacher, outdoor educator and lead researcher at Spectacle Learning Media. Through her long experience working with at-risk youth, she has developed a set of practical techniques for building rapport, addressing problematic and impaired behaviors and optimizing individual capacities for success. Her research interests include: examining how learning is influenced by environment, including physical health, mental health and neurological development, investigations of the impact of digital technologies on children’s wellbeing, resiliency, social development and cognitive abilities as well as establishing methods to make effective academic support accessible for all.
Ravi is a Senior Manager in Advisory Services at the Deloitte office in Trinidad where he leads the Consultancy Practice focused on the Education sector. Dr. Rampersad has over 17 years of experience across several sectors as a consultant, academic and researcher. Ravi spearheaded the design and development of Deloitte Trinidad’s Safe Schools Project aimed at making our schools into safer spaces for our children to learn and progress. He has a keen interest in social development and the sustainability of the NGO sector and has supported Deloitte’s efforts in design and delivery of capacity building workshops for the sector.
Jean Bernard is a Senior Partner and International Education Consultant at Spectacle Learning Media. Her experience in designing and implementing on-the-job training programs began in 1982 with employment as a language instructor at a medical facility in Saudi Arabia. Since then, she has worked with content providers in various fields to support language development alongside technical skills development such as a competency-based curriculum development training program for African educators at UNESCO. She has helped establish and apply quality standards to project development processes and outcomes at UNESCO, thereby placing into motion constructive cycles of feedback, monitoring and evaluation. She has facilitated writers' workshops for curriculum developers as well as for creators of nonformal community education materials (Uganda and South Sudan) following best practices in competency-based curriculum development and assessment methods. Her work as a curriculum and learning materials consultant over the past nine years has allowed her to gain significant experience in mentoring and facilitation of ToT workshops and ongoing workplace support in a wide variety of cultural and educational contexts. She is a lifelong learner, a team player, and a resilient, action-oriented person who enjoys new challenges and adventures. - Or click -Open in App StoreOpen in Google Play